McCabe: There were 25th Amendment discussions at DOJ to remove Trump from office 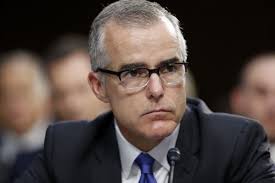 Former FBI Deputy Director Andrew McCabe says that after President Trump fired his boss, FBI Director James Comey, there were discussions within the Department of Justice about invoking the 25th Amendment to remove Trump from office.

McCabe confirmed the report in a new interview with “60 Minutes” host Scott Pelley, who relayed what McCabe told him on “CBS This Morning” Thursday.

“There were meetings at the Justice Department at which it was discussed whether the vice president and a majority of the Cabinet could be brought together to remove the president of the United States under the 25th Amendment,” Pelley said.