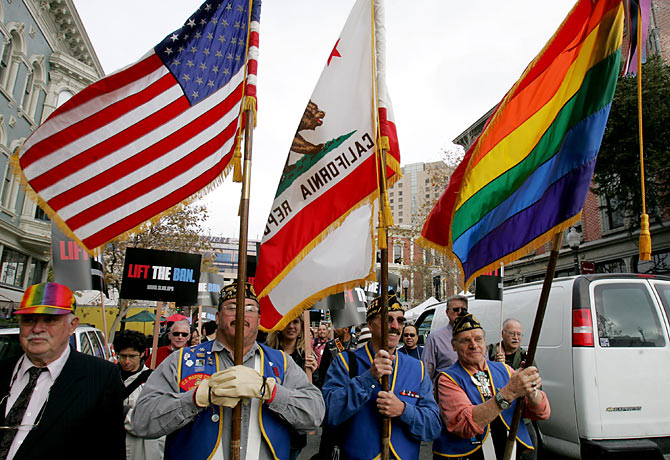 WASHINGTON (AP) – Senior Pentagon leaders on Friday warned Congress not to tamper with the ban on gays serving openly in the military until he can come up with a plan for dealing with potential opposition in the ranks.

In a strongly worded letter obtained by The Associated Press, Defense Secretary Robert Gates and Chairman of the Joint Chiefs of Staff Adm. Mike Mullen told the House Armed Services Committee that forcing policy changes on the military before it’s ready would be a mistake.

“Our military must be afforded the opportunity to inform us of their concerns, insights and suggestions if we are to carry out this change successfully,” Gates and Mullen wrote to the panel’s chairman, Missouri Democrat Ike Skelton.

Gay rights advocates want legislation this year that would freeze military firings of openly gay service members, and some senior Democratic senators have said they want to offer such a bill.

But other lawmakers, including Skelton, have said they are uneasy about lifting the ban and don’t want to act before the force is ready.

The letter provides Skelton and other unsettled Democrats political cover not to press the issue until after this year’s midterm elections. Earlier this week, Skelton asked Gates in a letter to outline his views as the House committee prepares the 2011 defense authorization bill.

Gates says he supports lifting the ban but wants to survey the troops first on how it should be done. He has ordered a study by Dec. 1 that will look at whether housing arrangements would have to be altered and gay partners would be allowed military benefits.

If Congress acts before then, “it would send a very damaging message to our men and women in uniform that in essence their views, concerns and perspectives do not matter,” he and Mullen wrote to Skelton.

Joe Solmonese, president of the Human Rights Campaign, said that if Congress doesn’t act this year it would send the message to gay troops that “the impact on them and their families does not matter to the military leadership, including their commander in chief.”

Defense officials hope the protracted timeline will also help troops adjust to the idea of serving with openly gay colleagues before they have to accept the change.

Sen. Carl Levin, the Michigan Democrat who heads the Senate Armed Services Committee, is expected to propose in the 2011 defense authorization bill a moratorium on gay firings in the military.

In the House, Rep. Patrick Murphy, D-Pa., is considered the most likely to offer the legislation.