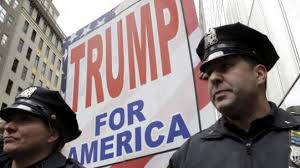 The Fraternal Order of Police (FOP) gave the GOP presidential nominee its endorsement after he received support from more than two-thirds of the group’s national board.

“[Trump] has seriously looked at the issues facing law enforcement today. He understands and supports our priorities and our members believe he will make America safe again,” said Chuck Canterbury, the FOP’s national president.

“He’s made a real commitment to America’s law enforcement and we’re proud to make a commitment to him and his campaign by endorsing his candidacy today.”

With labor groups overwhelmingly behind Clinton, Trump made an aggressive play for support from the police union.