Netanyahu Pushes Back, Says Jerusalem ‘Not a Settlement’ 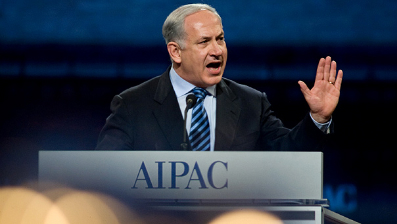 WASHINGTON — Secretary of State Hillary Rodham Clinton and Israeli Prime Minister Benjamin Netanyahu presented dueling positions on Jerusalem construction Monday, underlining a recent spat between the allies while simultaneously suggesting the incident is behind them.

Israel recently announced new housing plans for east Jerusalem, the part of the city Palestinians want for a future capital, drawing unusually sharp criticism from the Obama administration. Clinton renewed that disapproval on Monday, telling a pro-Israel audience that provocative Israeli land policies in areas claimed by the Palestinians are not in Israel’s long-term interests and undermine U.S. credibility as a mediator.

Speaking later in the day to a crowd of nearly 8,000 pro-Israel activists at the same forum, the American Israel Public Affairs Committee, including hundreds of congressmen and senators, Netanyahu did not budge from his position that building anywhere in Jerusalem is an Israeli right.

But at the same time both sides appeared to be indicating that while differences may remain, the spat — unique in recent memory for its harsh rhetoric and public nature — should not be allowed to further mar ties or delay the launch of Israeli-Palestinian peace talks.

The spread of Jewish homes on land claimed by the Palestinians threatens the Obama administration’s first attempts at shuttle diplomacy intended to establish an independent Palestinian state, Clinton said in her speech, and makes it hard for the United States to be an honest broker.