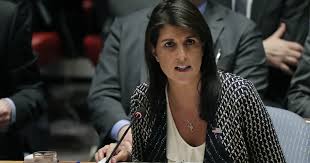 China and Russia “want to go around the rules” that restrict North Korea’s access to oil to the detriment of negotiations over the regime’s nuclear weapons program, top U.S. diplomats protested Friday.

“The best way we can support those talks is to not loosen the sanctions,” Ambassador Nikki Haley, the U.S. representative at the United Nations, told reporters. “The problem that we are encountering is that some of our friends have decided that they want to go around the rules.”

Secretary of State Mike Pompeo joined Haley in New York to brief the U.N. Security Council about the status of denuclearization talks with North Korea. The meeting focused significantly on North Korea’s access to oil and other energy sources, as Haley’s team filed a report assessing that the regime has violated annual caps on oil imports and demanded an embargo pursuant to recent sanctions resolutions, only to be rebuffed by China and Russia.

“Right now, North Korea is illegally smuggling petroleum products into the country at a level that far exceeds the quotas established by the United Nations,” Pompeo said. “The United States reminds every member-state of its responsibility to stop illegal ship-to-ship transfers and we urge them to step up their enforcement efforts as well.”