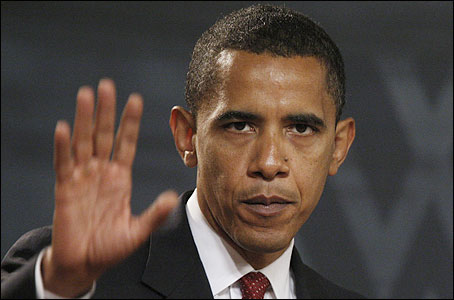 WASHINGTON (AP) â€” President Barack Obama said Saturday that â€œnothing can be off-limitsâ€ in the budget debate â€” even though Republicans have said tax increases are. The president said every tax break and federal program must come under scrutiny.

With an Aug. 2 deadline looming to raise the government borrowing limit, the president used his weekly radio and Internet address to call on Congress to make a deal.

He also renewed his call for Congress to eliminate some tax breaks for the well-off as part of any agreement. Republicans want deep spending cuts without any tax increases while Obama and Democrats call for what they term a â€œbalancedâ€ approach. That means one that also includes new revenue in the form of higher taxes for some, though Democrats steer clear of using phrases like â€œtax increasesâ€ or â€œhigher taxes.â€

â€œNow, it would be nice if we could keep every tax break, but we canâ€™t afford them,â€ Obama said. â€œBecause if we choose to keep those tax breaks for millionaires and billionaires, or for hedge fund managers and corporate jet owners, or for oil and gas companies pulling in huge profits without our help â€” then weâ€™ll have to make even deeper cuts somewhere else.â€

â€œNothing can be off-limits, including spending in the tax code, particularly the loopholes that benefit very few individuals and corporations,â€ the president said.

Lawmakers and the administration are seeking deficit cuts in the range of $2.4 trillion over the coming decade to balance a similar increase in the debt limit â€” one thatâ€™s large enough to keep the government afloat past the November 2012 election. Currently the debt limit is $14.3 trillion, and Treasury Secretary Timothy Geithner says it must be raised by Aug. 2 to avoid defaulting on the governmentâ€™s financial obligations for the first time in the nationâ€™s history.

With both sides dug into their positions, itâ€™s not clear how compromise will be reached, though the Senate canceled its plans to take a July Fourth recess next week in order to stay in Washington and work on the problem.

Obama expressed confidence a deal could be made and instead of singling out Republicans as the barriers to agreement, he directed his message to Democrats and Republicans alike.