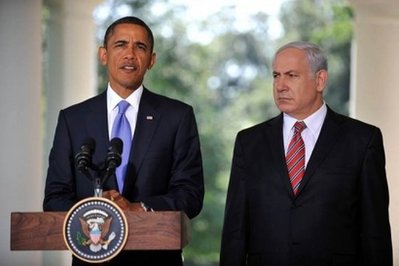 WASHINGTON (Reuters) â€“ U.S. President Barack Obama’s endorsement of a longstanding Palestinian demand on the borders of their future state sets the stage for what could be a tense meeting with Israeli Prime Minister Benjamin Netanyahu on Friday.

Netanyahu, who has had strained relations with Obama, headed for Washington saying the president’s vision of a Palestinian state on the borders of 1967 — as part of his vision for an elusive U.S.-brokered peace deal — could leave Israel “indefensible.”

The White House talks had never been expected to yield any significant progress to revive long-stalled peace talks, but now that prospect seemed dimmer than ever.

Obama, in a policy speech on Thursday on the “Arab spring” uprisings across the Middle East, laid down his clearest markers yet on the compromises Israel and the Palestinians must make for resolving their decades-old conflict.

His position essentially embraces the Palestinian view that the state they seek in the West Bank and Gaza should largely be drawn along the lines that existed before the 1967 war in which Israel captured those territories and East Jerusalem.

On the eve of Netanyahu’s visit, it was seen as a message that Obama expects Israel to eventually make big concessions.

“The viability of a Palestinian state cannot come at the expense of Israel’s existence,” Netanyahu said in a statement before flying to the United States for his talks with Obama.

Obama’s first outright declaration of his stance on the contested issue of borders could help ease doubts in the Arab world about his commitment to acting as an even-handed broker.

But the Democratic president quickly came under fire from Republican critics, who accused him of betraying Israel, the closest U.S. ally in the region. Pushing Netanyahu risks alienating the Jewish state’s base of support among the U.S. public and in Congress as Obama seeks re-election in 2012.

“This approach undermines our special relationship with Israel and weakens our ally’s ability to defend itself,” said House Republican Majority Leader Eric Cantor.

While Obama also had tough words for the Palestinians, Israeli officials were especially taken aback by his blunt language, including criticism of “settlement activity” and its continued occupation of Arab lands.

There was no word on whether Netanyahu, who heads a right-leaning, pro-settler coalition, had been forewarned.