However, some of theÂ Republican Party‘s most established donors increased their support in February to the pro-RomneyÂ Restore Our FutureÂ super PAC ahead of a spate of March primaries. The super PAC, run by former Romney aides, has blistered his opponentsÂ Rick SantorumÂ andÂ Newt GingrichÂ with millions of dollars in negative advertising in early voting states.

Republican donors “are either trying to resolve the nomination fight faster by helping Romney knock out his opponents or they consider the nomination fight resolved and they are aligning behind the person they think is the winner,” said Richard Briffault, a campaign-finance expert atÂ Columbia Law School.

Restore Our Future collected $6.4 million in February alone, according to a report filed Tuesday with theÂ Federal Election Commission. A pro-Gingrich super PAC raised $5.7 million, with $5 million coming from casino mogulÂ Sheldon AdelsonÂ and his wife, Miriam. By contrast, the super PAC created to help President Obama, Priorities USA Action, announced that it took in $2 million last month â€” half of which came from a single donor, television hostÂ Bill Maher.

Santorum raised $9 million in February, bringing his total for the election to nearly $15.7 million.He reported having $922,448 in debt and repaying himself for a $20,000 personal loan to the campaign.

Obama has collected more than $172.7 million since January of last year â€” a sum that swamps his Republican challengers, but falls shy of the $193.7 million he had raised at this point in the 2008 election, federal data show.

The president’s campaign has implored donors to give. In a recent e-mail to supporters last week, campaign managerÂ Jim MessinaÂ warned that Republicans “have groups ready to spend hundreds of millions of dollars.”

Obama’s “challenge is to persuade his financial supporters that it’s not too early to give money,” Briffault said. 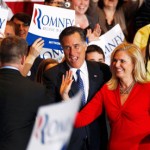