Obama says he didnâ€™t inform Mexico of U.S. gun smuggling operation because he didnâ€™t know about it 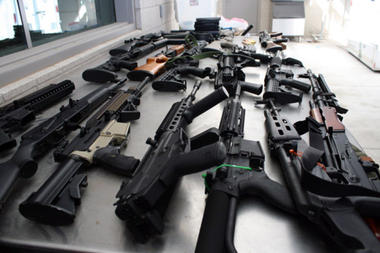 by Richard Dunham, My San Antonio

Under fire for an operation that allowed smuggling of U.S. weapons across the nationâ€™s border with Mexico, President Obama said in an interview that neither he nor Attorney General Eric Holder authorized the controversial â€œOperation Fast and Furious.â€

The Mexican government has complained that it didnâ€™t know about the U.S. operation that allowed guns to illegally cross the southwestern border so they could track the weapons.

Obama told Univisionâ€˜s Jorge Ramos that President Felipe Calderon wasnâ€™t informed of the operation because he â€” the president of the United States â€” wasnâ€™t informed either. When asked whether he knew of the weapon smuggling plan, Obama responded that it is â€œa pretty big governmentâ€ with â€œa lot of moving parts.â€

The investigation into the program comes after it was connected to two weapons that were found at the scene of a border shootout that killed U.S. Border Patrol agent Brian Terry in December. Likewise, a gun smuggled from the U.S. were used to kill Immigration and Customs Enforcement special agent Jamie Zapata, but it has not been determined if it was part of â€œFast and Furious.â€

When President Calderon came to visit Washington recently, the two presidents came together on a policy to stop drug and weapon smuggling across the border.