Palin kick-starts bus tour on back of motorcycle 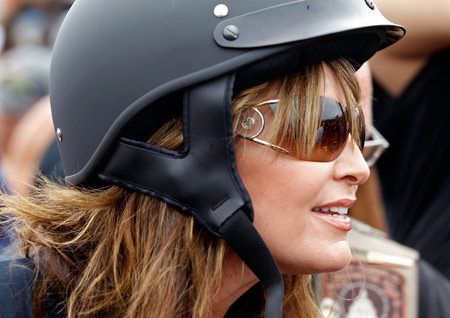 WASHINGTON â€“ Sarah Palin rumbled through Washington on the back of a Harley as she and her family began an East Coast tour Sunday, renewing speculation that the former Alaska governor would join the still unsettled Republican presidential contest.

Wearing a black leather jacket and surrounded by a throng of cheering fans, Palin and family members jumped on bikes and joined thousands of other motorcyclists on the Memorial Day weekend ride from the Pentagon to the Vietnam Veterans Memorial. Palin didn’t mention politics as she visited with participants, but she smiled broadly when many in the crowd urged her to run.

When one man asked her if she was running, she smiled and answered, “Don’t know.”

Palin remains one of the biggest questions for Republicans, who have not yet settled on a frontrunner to challenge President Barack Obama’s re-election. While many of Palin’s likely rivals have worked to build campaign organizations in early nominating states such as Iowa or New Hampshire, Palin has taken no concrete steps to begin a presidential campaign.

Given Palin’s star power, she might be able to wait longer than others. But the clock is ticking, the establishment isn’t happy with its options and one of the earliest tests of campaign infrastructure, the straw poll in Ames, Iowa, is scheduled for August.

Palin showed no hints she would join the field on Sunday although she again demonstrated her ability to build excitement and practice the person-to-person, retail politics that she clearly loves. In heels and black flare slacks, Palin shook hands and posed for pictures with well-wishers.