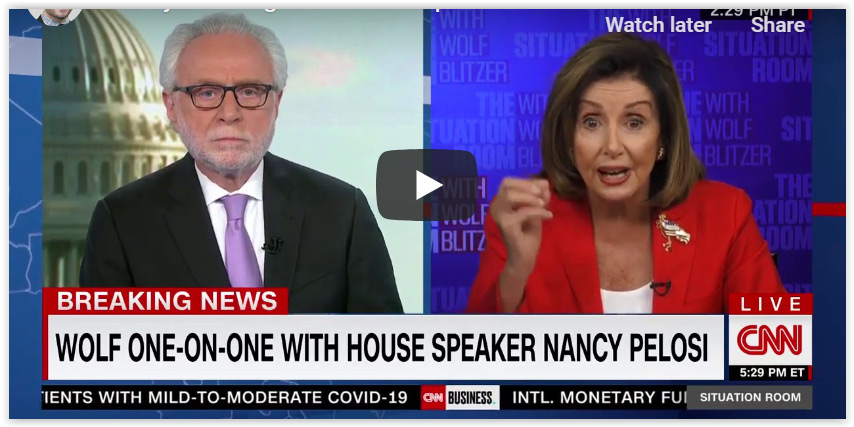 House Speaker Nancy Pelosi got angry with CNN anchor Wolf Blitzer on Tuesday when he presented her with Democratic demands for her to accept a deal with Republicans on another pandemic relief package.

Blitzer grilled Pelosi on why she is not willing to take a $1.8 trillion deal the White House offered to her on Friday. The two parties remain far apart from a compromise deal. Pelosi is seeking $2.4 trillion, including nearly $500 billion in state, local, and tribal funding, which Republicans oppose.

Blitzer asked Pelosi to respond to a tweet from California Democrat Ro Khanna asking Democratic leadership to make a deal with Republicans on a relief package because Khanna said, “People in need can’t wait until February.”

Pelosi responded by accusing Blitzer and CNN of unfairly siding with Republicans.

“I don’t know why you’re always an apologist, and many of your colleagues are apologists for the Republican position,” said Pelosi on Blitzer’s show The Situation Room, “Ro Khanna, that’s nice. That isn’t what we’re going to do.”

She made it clear that despite some prominent Democrats such as Khanna and Democratic presidential candidate Andrew Yang pressuring her to make a deal regarding a relief package, she wasn’t going to give in to Republican demands at this point.

“Honest to God, I really can’t get over it. Because Andrew Yang, he’s lovely. Ro Khanna, he’s lovely. They’re not negotiating this situation,” Pelosi said to Blitzer.

She also criticized Blitzer personally regarding his knowledge of the relief package negotiations and why she is not willing to make a deal yet.

“With all due respect, you really don’t know what you’re talking about,” Pelosi said to Blitzer.