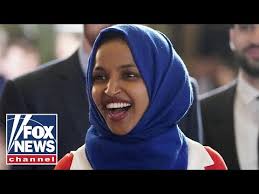 Rep. Ilhan Omar is facing renewed pressure over her latest Israel remarks — sparring with Rep. Nita Lowey after the fellow Democrat blasted her remarks as “hurtful.”

The Minnesota congresswoman drew criticism after appearing once again to reference the so-called “dual-loyalties” charge against Israel supporters. “I want to talk about the political influence in this country that says it is OK for people to push for allegiance to a foreign country,” Omar said last week. “I want to ask why is it OK for me to talk about the influence of the NRA, of fossil fuel industries, or big pharma, and not talk about a powerful lobbying movement that is influencing policy.”

Lowey, who was responding to a widely condemned poster displayed at the West Virginia statehouse Friday linking Omar to the September 11, 2001, terror attacks, started out defending the freshman Democrat before delivering her criticism.

“Gross islamophobic stereotypes – like those about @IlhanMN recently featured on posters in WVA – are offensive and have no place in political discourse. Anti-Semitic tropes that accuse Jews of dual loyalty are equally painful and must also be roundly condemned,” Lowey tweeted.