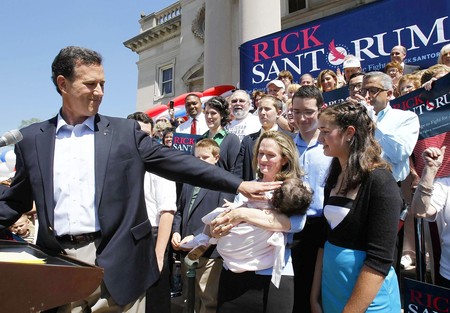 After a brass-band instrumental fit for a summer blockbuster’s battle scene,Â Rick Santorum launched his presidential bid from ancestral turf Monday, imploring an enthusiastic crowd of several hundred to join his fight for theÂ White House.

A favorite among Republican social conservatives, Santorum, 53, reiterated a stump speech he has delivered for nearly a year in the early voting states. The central theme of his campaign is that God â€” not government â€” grants people their rights.

“The principal purpose of America was to make sure each and every person was free. Ladies and gentlemen, that is at stake now,” Santorum said, pointing to the Democrats’ healthcare law, loathed by conservatives. “Every single American will be hooked to the government with an IV.”

Santorum’s announcement, set in a small town with red, white and blue balloons and a band playing such tunes as “Hello, Dolly,” harked back to a time in politics before the Internet and social media. The setting was meant to evoke feelings of tradition and patriotism.

And the crowd that gathered by the steps Monday afternoon, in an area that voted Santorum out of office in 2006, was fired up about Santorum’s candidacy. Only one man stood with a makeshift sign that said, “No hate in the White House.”

The announcement was not short of mini-dramas. The balloons popped sporadically during his speech; Santorum joked that they weren’t shots, although he’d taken plenty of them in his political career. Then an elderly woman fainted in the heat, and Santorum stopped speaking, handed off his water bottle and waited by her side until medics carried her away. He asked the crowd to pray for her.

Earlier, as the band played, Santorum supporters filled the courthouse steps. Many held up signs with his new campaign slogan, “The Courage to Fight for America.”

Santorum chose the courthouse because of its proximity to the coal mines where his grandfather worked after immigrating to America. Santorum said his grandfather came to Somerset County to escape fascist Italy, not for any entitlements and handouts.