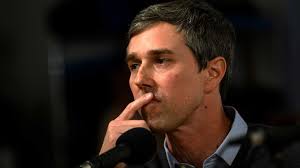 Reuters is facing ethical questions after admitting that reporter Joseph Menn sat on an unfavorable story about media darling Beto O’Rourke until after his crucial Senate race against Ted Cruz.
Reuters published its report Friday on the “Cult of the Dead Cow,” a famous group of hackers credited with inventing the term “hacktivism,” and revealed that now-2020 presidential candidate O’Rourke was a member.

The group is responsible for a variety of shady activity like stealing credit card numbers to pay for long-distance telephone service, violating copyright laws and hacking into computers, according to the report, which stressed that O’Rourke himself never “engaged in the edgiest sorts of hacking activity.”

The report was embarrassing for O’Rourke, who expressed regret for his past actions and writings shortly after the article’s publication.

But the reporter, it turns out, knew about this history since 2017 — and sat on it. According to Menn, members of the hacking group were protecting O’Rourke’s identity and wouldn’t confirm his affiliation unless the reporter promised not to write about it until after the November election. They apparently struck a deal.