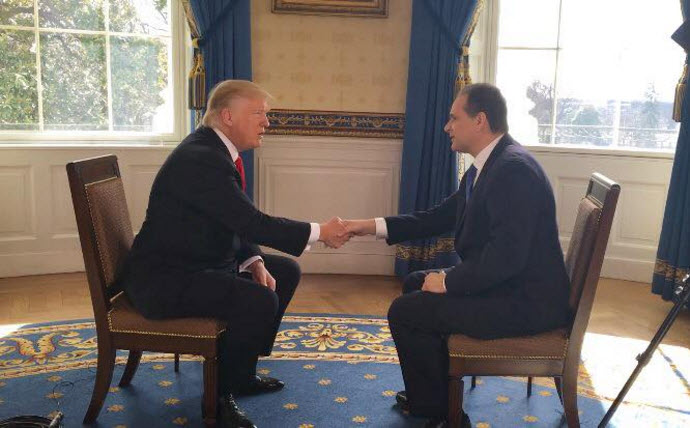 “The office makes the man”.  Those were the somber words in 1881 of newly appointed U.S. President Chester A. Arthur, a republican, upon finding himself unexpectedly thrust into the position after the tragic assassination of President James Garfield.  He became our nation’s 21st President.   After Donald Trump’s unorthodox, counter- establishment, victorious campaign both supporters and opponents alike are curious if the realities of the Oval Office will ‘change the man’.  To make matters more interesting he has surrounded himself with a cross-current mix of anti-establishment flame throwers, like Steve Bannon, and GOP establishment stalwarts like Reince Preibus.  Obviously the competing minds advising him can be a great asset or a disastrous liability.  Time will tell.  Recently my former colleague from One America News, David Brody now of CBN, interviewed President Trump 1 on 1 in the Blue Room of the White House only the third such interview granted by the President.  Brody joined me recently as a guest on the Politics and Profits podcast to share his first hand observations of the “mood inside the Trump White House”.

With the high energy of the first two weeks of the new administration and indications that at times not all staff  members were communicating and on the same page with each other I was curious as to how David Brody found the mood to be inside the White House. Brody, by the way, has interviewed Donald Trump many times over the course of the past several years and during the campaign.  “He was very subdued”, Brody told me.  “Unlike the Trump we all know he was relatively reserved, calm and collected.  Very subdued.  It was obvious he understood the gravity of the office”.

Perhaps the most interesting highlight were the number of questions which the White House staff requested of Brody in advance of the interview.  None.  While that may be common course of someone in a smaller political position, like say a small town city council member- it is unheard of on today’s scripted, rehearsed national political stage.  Just ask Hillary.

“Never did he or anyone on his staff ask for the questions, topics or issues in advance, Brody revealed. “This is the tenth interview I have done with Donald Trump over past seven years. It’s been the same every time.  To me what is says, is when you’re comfortable in your own skin, and don’t worry about political correctness , or worry about x y and z, then you don’t need advance notice of the questions.  You get the full unvarnished opinion”.

What I found interesting is that President Trump’s chief strategist Steve Bannon sat in the room and observed the full interview.  Bannon had just appeared on the cover of Time Magazine last week for his calling out the media as the ‘opposition’.  Needless to say Time isn’t fond of Bannon.  Brody said he and Trump went into great detail about the President’s feeling towards the U.S. media,

“It’s like Donald Trump has said: ‘If I’m not going to get a fair treatment w/ the media then why in the world would I sit down w/ Anderson Cooper?’ ”  “The media has no idea of how to deal with Donald Trump.  They are always a half step behind him.  Trump is willing to stand up and punch the bully in the face.  He likes to play the media as the foil”.  And for that the majority of American people (outside of California) love him.

You can listen to my entire interview with journalist David Brody by clicking the link below.  Perhaps the most surprising part of the interview is President Donald J. Trump talking about his relationship with faith and God since becoming president.  In the past it’s an issue he has kept private and to himself.  Until now.