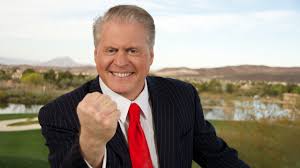 “Barack Obama gave Israel the middle finger on his final days in office and I am personally asking President Trump do undo what was done.”  Those were the brash words of Las Vegas serial entrepreneur Wayne Allyn Root who recently appeared as a guest on the ‘Politics and Profits’ podcast.

So why is Root upset over that?  To answer that we need to take a step back and take a look at three items. First, in Barack Obama’s FINAL HOUR in office the President released $221 million of U.S. taxpayer to the Palestinian Authority, an enemy of Israel. Money which had previously been frozen by Congress.  He did so by the way, through and executive order something which the media has been so shocked at Trump for using during his first weeks in office.  Secondly, as had been highly publicized at the time-  in his final days President Obama allowed the United Nations to condemn Israel for the first time in U.S. history.  Thirdly, there is the highly publicized and much criticized controversial Iran nuclear deal.  None of these items obviously demonstrate a president who is warm and friendly towards Israel.  Ben Rhoades was President Obama’s point man behind the scenes for both the Iran nuclear deal and the U.N. resolution condemning Israel.  It was his job to sell the merits of both deals to the U.S. media.  And now- through a final days appointment by President Obama- Rhoades sits on the Holocaust Memorial Council.

Root says as a Jewish American he feels insulted and is outraged that Barack Obama would do such a thing. Don’t you just know that if Donald Trump had done something similar there would be angry media calls of anti- semitism and racism?  And so now, Wayne Allyn Root is calling on his friend, the President, to step in and remove Ben Rhoades from the Holocaust Memorial Council.

You can hear my full interview with Wayne Allyn Root below as we cover a full range of issues including business and the economy.