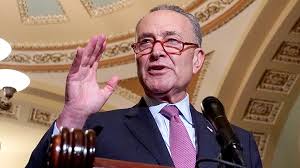 Sen. Chuck Schumer has the Senate majority in his sights, and he’s hoping President Trump’s sagging approval ratings will help him win it.

Schumer, the Senate minority leader and a New York Democrat, is one of Trump’s staunchest critics in Congress and has used his perch as a party leader to criticize the president’s performance at every opportunity.

Democratic leaders reason that the worse Trump looks to voters on the November ballot, the better their own candidates will perform against Senate Republican incumbents, whom they need to defeat in swing states in order to clinch the majority.

One of Schumer’s latest attacks on Trump followed the president’s announcement of an updated list of Supreme Court nominees he would consider if a vacancy occurs.

Schumer said Trump’s list is a threat to the American middle class.

“It is clear that his Supreme Court nominees would undermine every priority middle class Americans care about,” Schumer said in a statement. “These radical nominees would continue the effort to reverse important progress America has made over the last 50 years on women’s reproductive freedom, strip away critical healthcare protections for Americans with pre-existing conditions, and gut labor, environmental, and civil rights.”

Schumer lambastes Trump on a near-daily basis during leader remarks on the Senate floor, accusing him of lacking the right temperament to lead the nation and working with Russian President Vladimir Putin to manipulate the election. Schumer accuses Trump of mismanaging the White House in general, and perhaps most significantly, he blames Trump for the 180,000 deaths and the economic recession caused by the coronavirus.

Trump’s approval ratings have long been underwater, with slightly more voters disapproving of his job performance. But Trump has fared particularly poorly among voters when it comes to his handling of the coronavirus outbreak. Recent polling shows voters disapprove of his efforts by 12-19 points.

Schumer isn’t wasting a moment when it comes to blaming Trump for the deaths and economic turmoil.

“We had a president who simply lied about the dangers of the disease and suggested that Americans inject bleach,” Schumer said in September after a new book by journalist Bob Woodward revealed interviews with Trump in which the president said he downplayed the lethal virus to avoid panicking the nation.

“The president’s comments in this interview were despicable and should serve as a warning to all Americans about who this man is and his total, complete, abject failure to lead,” Schumer said.

Schumer has the unique ability to block the president’s agenda in the GOP-led Senate through the use of a filibuster, which requires 60 votes to surpass.