by MORGAN CHALFANT AND BRETT SAMUELS | The Hill
September 18, 2020 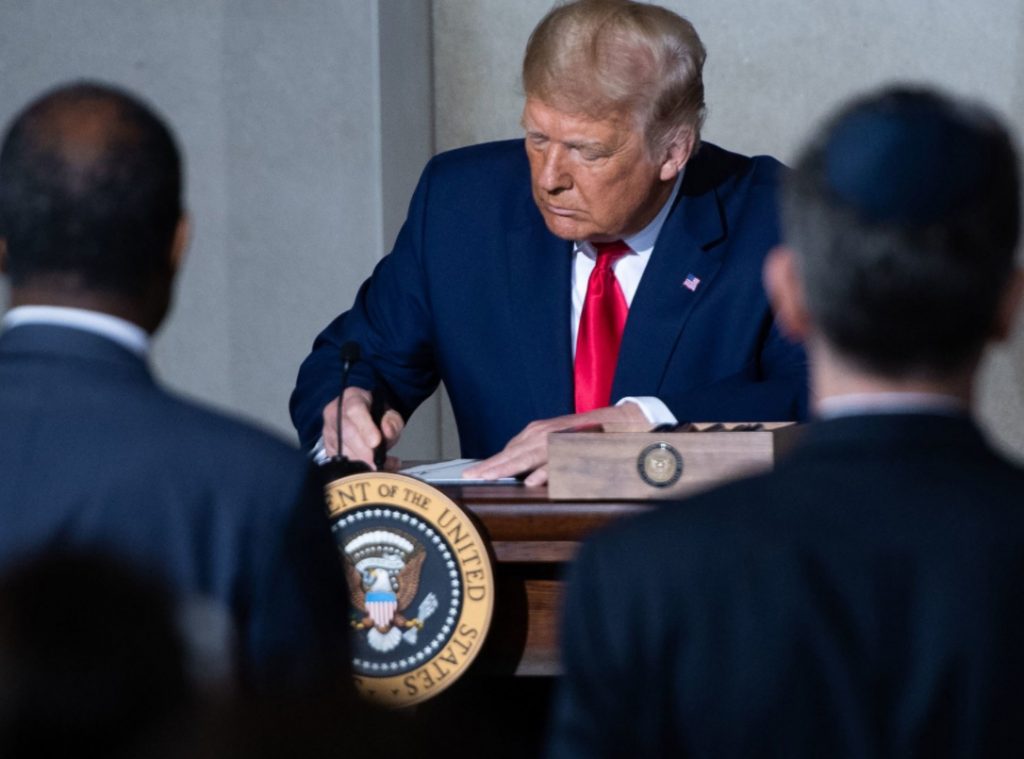 President Trump on Thursday described America’s heritage and history as under assault from the left, decrying anti-racism teachings and “cancel culture” while announcing plans for a new commission to promote “patriotic education” in U.S. schools.

In a speech delivered in somber tones at the National Archives Museum, Trump painted a dramatic and dark portrait of an effort by liberals to “indoctrinate” America’s children and repress American values, culture and faith.

“Whether it is the mob on the street or the cancel culture in the boardroom, the goal all is the same — to silence dissent, to scare you out of speaking the truth, and to bully Americans into abandonment of their values, their heritage and their very way of life,” Trump said in the speech at the White House Conference on American History.

“We are here today to declare that we will never submit to tyranny. We will reclaim our history, and our country, for citizens of every race, color, religion and creed,” he said.

Trump announced plans to sign a new executive order establishing a national commission to promote “patriotic education” in American schools, which he said would be called the 1776 Commission, a nod to his criticism of the 1619 Project throughout the speech.

The commission will be tasked with celebrating the upcoming 250th anniversary of the country’s founding and with encouraging educators to “teach our children about the miracle of American history.”

In his remarks, Trump took particular aim at “critical race theory,” a methodology that argues racism and racial inequality are a result of systemic power structures. Trump called it a “Marxist doctrine” and said teaching it to children amounts to “a form of child abuse in the truest sense of the word.”

The president similarly rebuked the 1619 Project, an ongoing enterprise developed by The New York Times Magazine last year with the stated goal of “aim[ing] to reframe the country’s history by placing the consequences of slavery and the contributions of black Americans at the very center of our national narrative.” Both, he said, are “ideological poison that, if not removed, will dissolve the civic bonds that tie us together.”

The president and some of his top aides have rejected the idea that there is systemic racism in the United States in the face of nationwide demonstrations in response to multiple police killings of Black people.

“We embrace the vision of Martin Luther King where children are not judged by the color of their skin but by the content of their character. The left is attempting to destroy that beautiful vision and divide Americans by race in the service of political power,” Trump said Thursday.

“By viewing every issue in the lens of race they want to impose a new segregation, and we must not allow that to happen,” he continued.

Trump delivered the remarks on Constitution Day, marking the 233rd anniversary of the formation and signing of the U.S. Constitution in 1787. He spoke from a stage in front of the Declaration of Independence, Bill of Rights and the Constitution.

Thursday’s speech aligned with efforts from Trump and his campaign to appeal to white voters by depicting protests that started Memorial Day weekend after the police killing of George Floyd as radical attempts to characterize the country as racist and demean its history.

While the protests sparked calls for policing reform and solutions to address racial inequality, the president focused on more unruly aspects such as the efforts by some demonstrators to topple statues of Confederate leaders and other controversial figures, including Christopher Columbus and former President Andrew Jackson.

Trump delivered a Fourth of July speech at Mount Rushmore, where he pledged to defend the country’s “heritage” against what he described as “angry mobs” and accused public schools of teaching children to “hate their own country.”

The White House earlier this month seized on a report from the Washington, D.C., local government calling to contextualize, remove or relocate the Washington Monument, the Jefferson Memorial and a Columbus statue, among others.

In a Sept. 4 memo, Office of Management and Budget Director Russ Vought at Trump’s direction ordered executive branch agencies to halt trainings on “critical race theory,” “white privilege,” or others that suggest “that the United States is an inherently racist or evil country” or “any race or ethnicity is inherently racist or evil.” Vought described these race-related trainings as “divisive” and “un-American.”

“The divisive, false, and demeaning propaganda of the critical race theory movement is contrary to all we stand for as Americans and should have no place in the Federal government,” Vought wrote.