Trump on Obama and Islam: ‘There’s something going on’ 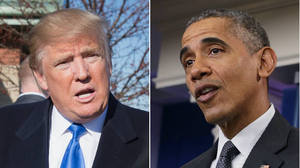 “We’re led by a man that either is not tough, not smart, or he’s got something else in mind,” the presumptive Republican presidential nominee said during a phone interview on “Fox and Friends.”

“He doesn’t get it, or he gets it better than anybody understands. It’s one or the other, and either one is unacceptable”

294 Comments - what are your thoughts?