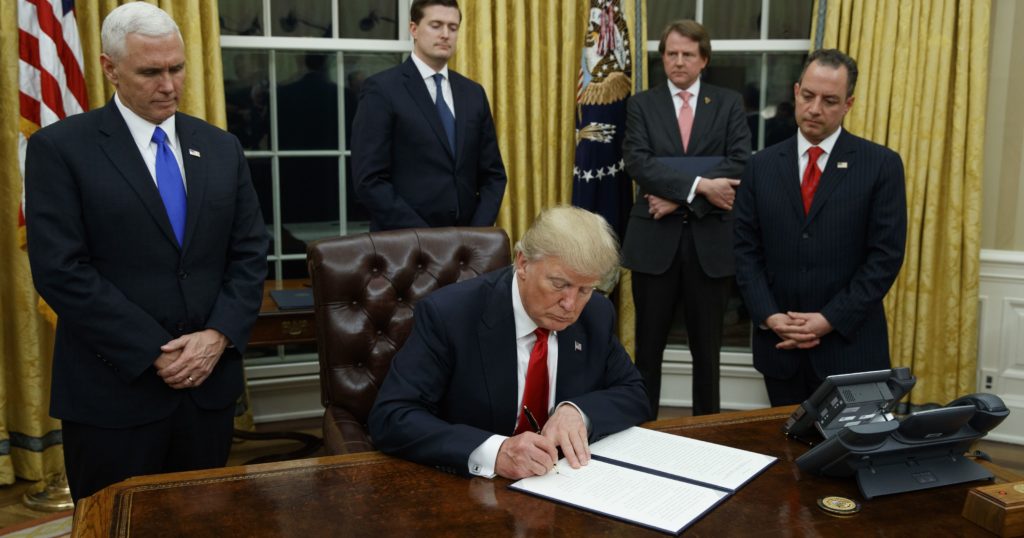 According to sources within the new administration and according to Axios who quotes “one of the best-wired Republican lobbyists in town”, President Trump is set to hit the ground running hard with a flurry of immediate executive orders.  Of course last Friday he issued one on Obamacare which is still vague in the details.  Below is a list of what we should expect to see coming next:

* Instruct the Defense Secretary to come up with a plan to destroy and eliminate ISIS.
In 2014, a former CIA agent who had served on the front lines in Iraq fighting al Qaeda told me, “we can eliminate ISIS in two to three years if we commit ourselves 100% to doing it”.  It appears we are about to find out if he was right.  We are also about to find out if ISIS is the JV basketball team which former President Obama told us they were, and if having a positive strategic relationship with Russia is such a bad thing after all.  The one thing the American people do not want, of course, is another war which seems to drag on with no concrete end in site.

During his Inauguration speech President Trump said the day marked a peaceful transfer of power not only from one president to another but also from the Washington elite to the American people.  Corporate media (especially ABC’s George Stephanopoulos and NBC’s Lester Holt) were outraged saying or implying that the new President was a dangerous populist.  A five year ban on lobbying of transition and administration officials is consistent with Trump’s message that for too long those in Washington have served themselves at the expense of the American people.  It will go over well with his supporters and the American people in general.

Get ready for the you-know-what to hit the fan. The top 10 Sanctuary cities in America according to Politico.com are: Los Angeles, New York, Chicago, Seattle, Austin, Newark, Denver, Philadelphia, Minneapolis and San Francisco.  It’s safe to say that Mayors De Blasio of New York, Rahm Emanuel of Chicago and Ed Lee of San Francisco are going politicize and oppose whatever is drawn up no matter how tame and watered down the executive order may be. Not to suggest that it will be.  It’s a polarizing political issue and President Trump’s opponents are going to do their best to pounce and paint him as racist.  The media too will be all over this with lead stories.  Meanwhile, it will be interesting to see if his staunchest supporters feel he goes far enough.

Two other actions President Trump is expected to take immediately are:

* Report on readiness, and something cyber security related

Not much I can say here other than #MAGA and it’s safe to say that there shouldn’t be any administration officials “puling a Hillary” and maintaining their government business on a private email server.  Or at least we hope not.

It looks like those who protested in the funny looking pink hats at the Woman’s March over the weekend will have something to vent their anger at immediately (although it was unclear what exactly they were protesting other than Trump’s election victory).  Remember, for all their talk about tolerance and ‘power to the woman’, pro-life women were not welcome at the ‘Woman’s Day’ protest.  It would appear this Executive Order will be welcome news by pro-life supporters which by default makes it opposed by the “hands off my body” crowd.

This was just a quick down and dirty overview of what to expect immediately from the new administration in terms of Executive Orders as events and news items are quickly moving.  I will update you and have commentary on anything of significance which happens as it occurs.