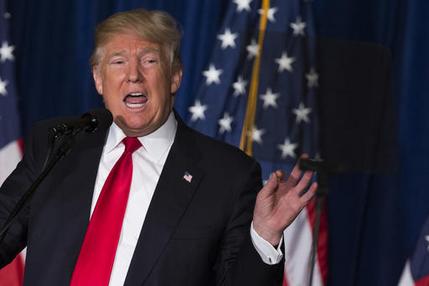 In a rare formal policy speech, Republican front-runner Donald Trump vowed Wednesday to put American security “above all else” if elected president, warning allies they would be left to defend themselves if they don’t “pay their fair share.” He also called for an easing of tensions with Russia “from a position of strength, only.”

“‘America first’ will be the major and overriding theme of my administration,” Trump said.

Fresh off a sweep of five Northeast primaries, Trump sought to expand on foreign policy views that have lacked detail and worried experts in both parties. Still, he left major questions about his proposals unanswered, including his plan for defeating the Islamic State group, casting his sparse details as a strategy for catching America’s enemies off guard.

“We must, as a nation, be more unpredictable,” Trump said during a speech at a Washington hotel. The businessman read his remarks off a teleprompter, a notable change for a candidate who typically speaks off the cuff and has mocked his rivals for giving prepared speeches.

Many elements of Trump’s speech were similar to his typical campaign remarks, but he delivered them in a much more sober, restrained manner. Critics have said repeatedly that he has not shown an ability to act and sound “presidential.”