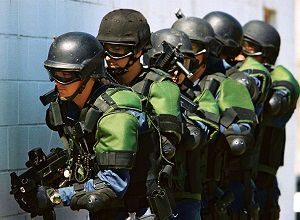 If not for the fact that under President Obama the U.S. Customs and Border Protection agency doesn’t actually control our border, it wouldn’t seem so strange that the agency is interested in obtaining weapons and training for mass crowd control.

It’s just the most recent in a long line of eyebrow-raising weapons-purchasing efforts by the federal government.

If and when these things hit the mainstream media, they get pooh-poohed and swept under the rug, even if the math never adds up quite right.

For instance, Homeland Security’s well-known stockpiling of 1.6 billion rounds of ammunition under Obama. That’s about five rounds for every American. The official spin is that it’s all necessary for target practice, yet thinking people can’t help but notice that even agencies like the IRS have armed response teams these days.

Then there is the ongoing militarization of local law enforcement agencies, which have been receiving armored vehicles, military-grade weapons and other military surplus courtesy of the federal government.