Warren shows signs of broadening her base 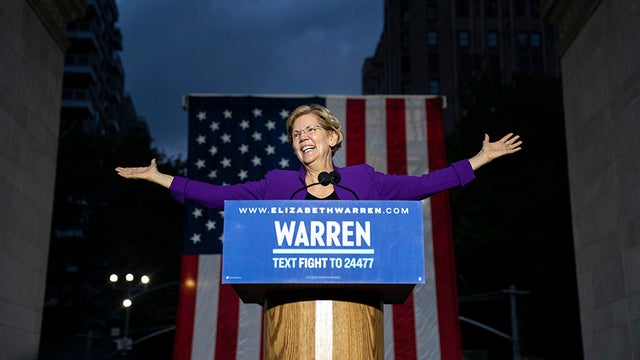 Sen. Elizabeth Warren (D-Mass.) appears to be growing her share of support from black voters, who have been slow to warm to her campaign.

A new poll from NBC News and The Wall Street Journal found Warren in second place among black voters with 13 percent support, her best showing in any poll to date. That’s up from 8 percent in the previous survey from July, although the 5-point swing is within the poll’s margin of error.

Former Vice President Joe Biden still dominates the field with black voters, and he’ll be the favorite to win the nomination unless that changes. Biden pulled 49 percent support from black voters in the NBC-Journal poll, a 36-point lead over Warren.

But Warren is showing signs of life here after public opinion surveys from earlier in the cycle showed her languishing in the single digits among black voters, raising criticism from some quarters that her appeal was limited to wealthy white liberals on the coasts.

Democratic strategists say Warren’s gains are enough to indicate that black voters are at least open to considering her candidacy, leaving her in prime position to capitalize down the road if she can maintain her upward trajectory in the race.

Only 9 percent of voters in the NBC-Journal poll said their minds are definitely made up, and Warren is the top second choice for voters.

“She’s expanding her coalition, and that’s a credit to her strategy and messaging and the bottom-up campaign she’s built to this point,” said Democratic strategist Antjuan Seawright.

The new polling comes after a strong week for Warren.

The Massachusetts Democrat locked down the endorsement from the Working Families Party, which backed Sen. Bernie Sanders (I-Vt.) in 2016.

Warren’s campaign said that more than 20,000 people attended her Monday night rally in Manhattan, drawing attention and dismissive remarks from President Trump, who said “anybody could do that.”

Warren has been the media darling in the race so far, earning rave reviews and glowing profiles for her policy plans and for sticking around rallies for hours afterward to take photographs with supporters.

And there are signs that she is beginning to separate herself from Sanders, her chief rival on the left.

The NBC-Journal poll found Biden in the lead at 31 percent support, followed by Warren at 25 percent and Sanders at 14 percent. The same poll found Warren leading the field with 29 percent support from Hispanic voters, edging out Sanders, whose campaign has touted its support from Latinos as evidence of his diverse coalition.

A poll of Iowa conducted by Focus on Rural America found Biden at 25 percent support and Warren at 23 percent, with Sanders moving down to fifth place, at 8 percent.

Warren appears to have benefited from the decline of several other candidates, such as South Bend, Ind., Mayor Pete Buttigieg (D) and Sen. Kamala Harris (D-Calif.).

“I think Warren and Biden have split the progressive constituency, and any Warren bump has been at the expense of Sanders and second-tier candidates, not Biden, whose base has remained steady,” said pollster Mark Penn.

Still, Warren has work to do.

The bulk of her support to date has come from college-educated white voters, or the “professor class,” as some Democrats call it.

Polls routinely find Warren leading the field among white people and the most liberal voters, and questions remain about whether she’ll be able to cut enough into Biden’s lead with black voters to catch him.

Warren comes from a predominantly white state and has an Ivy League pedigree, including as a Harvard Law professor. Black voters are not typically as liberal as white voters, which presented an insurmountable obstacle for Sanders in the 2016 Democratic presidential primary against Hillary Clinton.

And many black Democrats feel an enormous sense of loyalty to Biden, the vice president under the nation’s first black president. During the Obama years, Biden made frequent trips to South Carolina, where black Democrats make up more than 50 percent of the primary electorate.

The Politico–Morning Consult survey released this week found Warren at 10 percent support among black voters nationally, up 5 points from April, but trailing Biden by 31 points and Sanders by 11 points.

“People forget, not only is Joe Biden’s coalition strong with African Americans, we call him Middle-Class Joe for a reason,” said Seawright. “Middle-class and working-class voters, both black and white, have always been his strength. He has a strong connection there.”

But Democrats say Warren doesn’t need to be in first place among black voters to be successful when the Iowa caucuses roll around.

Warren’s support from white liberals could be enough to propel her to victory in Iowa or New Hampshire, helping her build momentum ahead of South Carolina, which is third in line to vote.

NBC’s Steve Kornacki noted over Twitter that in 2004 former Secretary of State John Kerry, who was also a senator from Massachusetts, was polling at 1 percent among black voters in the NBC-Journal poll before Iowa. Kerry won in Iowa and New Hampshire and then captured 34 percent of the black vote in South Carolina en route to the nomination and 56 percent support from black voters nationally.

“Black voters are pragmatic, and just like anyone else they want to be with a winner,” said one South Carolina Democrat, who said Warren’s crowds at rallies in the Palmetto State are among the most diverse in the field.

“Sen. Warren has a lot of momentum right now. You look at the field and where the energy is, it’s with her and she seems to be doing all the right things to capitalize on it, whether it’s her proposals, her message or connecting with people one-on-one. Any candidate willing to spend four hours taking selfies, that’s special for a lot of people.”