What Do Edward Snowden And Hillary Clinton Have In Common? 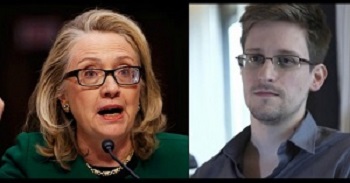 When it comes to classified information, some leaks are more equal than others. If you are a whistleblower like Edward Snowden, who tells the press about illegal, immoral or embarrassing government actions, you will face jail time. But it’s often another story for US government officials leaking information for their own political benefit.

Two stories this week perfectly illustrate this hypocrisy and how, despite their unprecedented crackdown on sources and whistleblowers, the Obama administration – like every administration before it – loves to use leaks, if and when it suits them.

Consider a government leak that ran in the New York Times on Monday. The article was about 300 of Hillary Clinton’s now notorious State Department emails, which had been hidden away on her private server for years and were turned over to Congress as part of the never-ending Benghazi investigation. “Four senior government officials” described the content of her emails to New York Times journalists in minute detail “on the condition of anonymity because they did not want to jeopardize their access to secret information”.