No Pipeline For You! Feds Deny Permit for Dakota Access 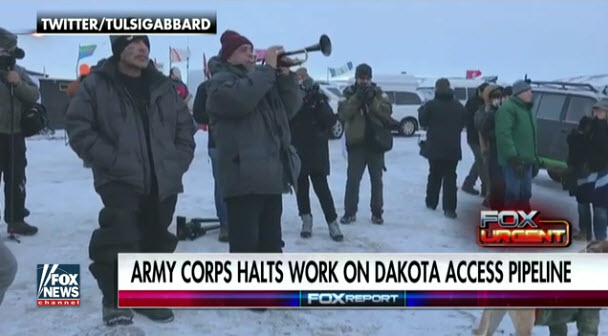 The Army Corps of Engineers on Sunday announced it would instead conduct an environmental impact review of the 1,170-mile pipeline project and determine if there are other ways to route it to avoid a crossing on the Missouri River.

“Although we have had continuing discussion and exchanges of new information with the Standing Rock Sioux and Dakota Access, it’s clear that there’s more work to do,” Army Assistant Secretary for Civil Works Jo-Ellen Darcy said in a statement.

“The best way to complete that work responsibly and expeditiously is to explore alternate routes for the pipeline crossing.”

The announcement comes one day before the Army Corps of Engineers’ deadline for demonstrators to leave the protest site. The governor of North Dakota had also issued an emergency evacuation order.