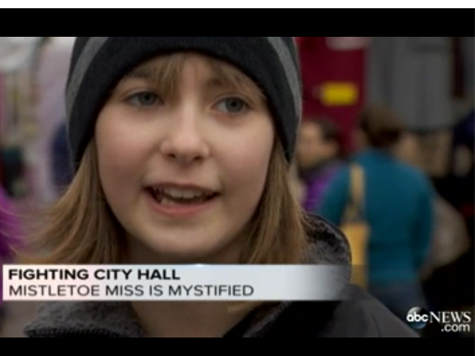 An 11-year-old Oregon girl who wanted to help her father pay for her braces by selling mistletoe over the holidays, found herself embroiled in city bureaucracy. On Saturday, Madison Root went to the downtown market to sell fresh mistletoe she cut and wrapped herself from her uncle’s farm in Oregon.

She told KATU News, “I felt like I could help my dad with the money.”

However, a private security guard hired by Portland Saturday Market blocked her path to a straighter smile by telling her to stop selling the mistletoe, citing city rules that ban conducting business or soliciting at a park without proper approval and documentation.

Specifically, Chapter 10.12 of the Portland city code states that soliciting or conducting business includes the display of ”goods, or descriptions or depictions of goods or services, with the intent to engage any member of the public in a transaction for the sale of any good or service.”

The guard reportedly told Madison she could set up shop outside the boundaries of the park…or she could simply ask for donations. Her father, Ashton, told ABC.com, “The guard told her she can beg if she wanted but she can’t sell the mistletoe.” He went on to say that his daughter “does not want to encourage begging and wants people to earn their living… She is so keen on high work ethic.”