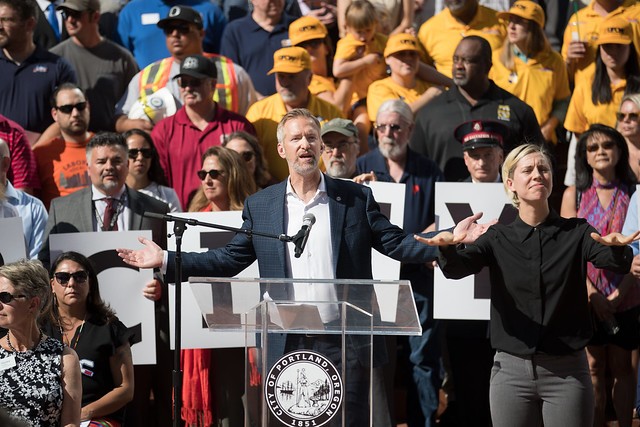 Nearly one hundred Portland leaders met in Pioneer Courthouse Square this morning to address people intent on spewing hate and throwing punches at a Saturday, August 17 protest.
“We’ve come here together, united as one, putting aside any differences we may have to send a clear and unifying message,” said Mayor Ted Wheeler, who coordinated the morning event. “We stand in opposition to the rising national tide of hate, intolerance, bigotry, and white supremacy.”

Wheeler’s comments were followed by short speeches by a range of progressive politicians, activists, and business leaders. Some explicitly decried the Proud Boys—the alt-right group behind the weekend demonstration—and others condemned any protesters seeking a fight. But despite their varied phrasing, the group’s collective statement against hate was a rare sign of unity in a city that’s been splintered by divisive protests.