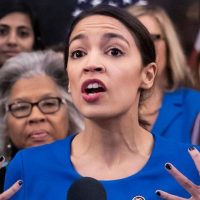 Pelosi throws shade as Green New Deal unveiled: ‘Green dream or whatever they call it’

by Rick Tucker | Breitbart
November 12, 2014
Leading liberal thinkers such as Thomas Friedman often lament that the U.S. can’t be “China for a day,” with a single day set aside for a dictatorial government to avoid the messiness of democracy and simply impose the radical policies they think are necessary. Perhaps President Obama was inspired, then, by his trip to China. Under an agreement signed Wednesday… END_OF_DOCUMENT_TOKEN_TO_BE_REPLACED

by FOXNews.com
June 2, 2014
The Obama administration is set to announce a rule Monday to limit carbon emissions in thousands of fossil-fuel burning plants across the country, a cornerstone of President Obama’s climate-change agenda and his first-term promise to reduce such emissions by 17 percent by 2020. The Environmental Protection Agency will ask existing plants to cut pollution by 30 percent by 2030, according… END_OF_DOCUMENT_TOKEN_TO_BE_REPLACED

by Cheryl K. Chumley-The Washington Times
April 14, 2014
Climate change experts affiliated with the United Nations said the only way to turn back the clock on global warming-type disasters is to force all the nations of the world to keep all production and energy activities to a “near zero” carbon emission level — and to mandate taxes and fees across the world. The only way to do that… END_OF_DOCUMENT_TOKEN_TO_BE_REPLACED

by 1776 Coalition
January 3, 2011
By Ramit Plushnick-Masti-Associated Press HOUSTON | A long-standing tit-for-tat between Texas and the U.S. Environmental Protection Agency over how to regulate pollution has grown fierce in recent months, leaving industry frustrated and allowing some plants and refineries to spew more toxic waste into the air, streams and lakes than what is federally acceptable. Both sides and conservation groups agree the… END_OF_DOCUMENT_TOKEN_TO_BE_REPLACED