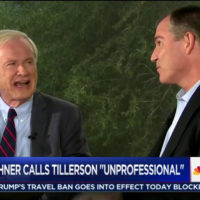 Did MSNBC’s Chris Matthews Suggest Trump Son-In-Law Should Be Murdered?

by Kyle Balluck, The Hill
February 24, 2014
MSNBC host Chris Matthews said on Sunday that Democrats could lose ten Senate seats in the midterm elections. “To the Democrats, this election, a rosy scenario is to lose five Senate seats, not six,” he said on NBC’s “Meet the Press.” “They could lose 10. And so what they’ve said is, ‘If we’re going to lose 10 seats potentially,’ and… END_OF_DOCUMENT_TOKEN_TO_BE_REPLACED

Chris Matthews on Obama win: ‘I’m so glad we had that storm’

by 1776 Coalition
November 8, 2012
To all the millions of victims of superstorm Sandy, Chris Matthews has a message: “I’m so glad.” The MSNBC host, on a panel of pro-Obama pundits including Rachel Maddow, ended election coverage overnight by saying he’s “glad” the storm hit, suggesting it served a greater good by boosting President Obama to a second term. “I’m so glad we had that… END_OF_DOCUMENT_TOKEN_TO_BE_REPLACED