by JENNIFER EPSTEIN | Politico.com
July 6, 2013
Secretary of State John Kerry was on his boat briefly on Wednesday, contrary to an earlier denial by the State Department, but was there only briefly and did not conduct official business while on board. â€œWhile he was briefly on his boat on Wednesday, Secretary Kerry worked around the clock all day including participating in the presidentâ€™s meeting with his… END_OF_DOCUMENT_TOKEN_TO_BE_REPLACED 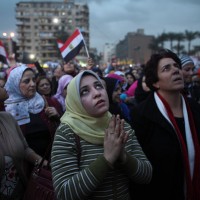 by 1776 Coalition
November 27, 2012
By Jeffrey Fleishman and Reem Abdellatif, Los Angeles TimesCAIRO â€” Egyptian President Mohamed Morsi’s suggestions on Monday that he would scale back broad powers he assumed last week failed to appease the nation’s judiciary, which would still not have oversight over certain government institutions, including the Islamist-led assembly drafting the country’s new constitution.
Morsi and senior judges met for nearly …
END_OF_DOCUMENT_TOKEN_TO_BE_REPLACED

by 1776 Coalition
November 23, 2012
By News Wires, France24.com Protesters torched Muslim Brotherhood offices on Friday, state media said, as supporters and opponents of President Mohamed Morsi staged rival rallies across Egypt a day after he assumed sweeping powers. The offices of the Freedom and Justice Party (FJP), the Muslim Brotherhood’s political arm, were set ablaze in the canal cities of Ismailiya and Port Said,… END_OF_DOCUMENT_TOKEN_TO_BE_REPLACED

by 1776 Coalition
August 13, 2012
By Jeffrey Fleishman and Reem Abdellatif, Los Angeles TimesCAIRO â€” Egyptian President Mohamed Morsi on Sunday purged the nation’s military leadership in a provocative move to expand his power and push aside generals who epitomized the inner circle of deposed leader Hosni Mubarak.
The dismissals, including the forced retirement of Field Marshal Mohamed Hussein Tantawi, who led the military council …
END_OF_DOCUMENT_TOKEN_TO_BE_REPLACED

CAIRO â€”Â Egyptâ€™s highest court and its most senior generals on Monday dismissed PresidentÂ Mohamed Morsiâ€™s order to restore the dissolved Parliament as an affront to the rule of law, escalating a raw contest for supremacy between the competing camps. The power struggle reflected dueling claims to Egyptâ€™s emerging politics, with each side trying to frame the …
END_OF_DOCUMENT_TOKEN_TO_BE_REPLACED

CAIRO â€” PresidentÂ Mohamed MorsiÂ ofÂ EgyptÂ has appointed a committee to investigate the killing of protesters during and after the uprising early last year, in what appeared to be a strong challenge to the authority of Egyptâ€™s powerful security services. Mr. Morsiâ€™s decree, which was issued late Thursday and was his 10th …
END_OF_DOCUMENT_TOKEN_TO_BE_REPLACED

by 1776 Coalition
June 25, 2012
Cairo (CNN)Â — Hours after being declared his nation’s first democratically elected president,Â Mohamed MorsiÂ vowed late Sunday to represent all Egyptians, and he urged his countrymen to put aside their differences and come together for the common good. “This national unity is the only way to get Egypt out of this difficult crisis,” Morsi said in a nationally… END_OF_DOCUMENT_TOKEN_TO_BE_REPLACED