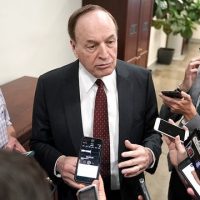 by JORDAIN CARNEY -The Hill
July 10, 2019
Senators are growing anxious that they might have to vote to raise the nation’s debt ceiling in a matter of weeks given new estimates that… END_OF_DOCUMENT_TOKEN_TO_BE_REPLACED

by 1776 Coalition
August 23, 2010
Rasmussen Reports So far, it looks like Republican incumbent Richard Shelby wonâ€™t have a problem winning his fifth term as a U.S. senator from Alabama. A new Rasmussen Reports telephone survey of Likely Voters in the state finds Shelby leading his Democratic challenger, William Barnes, by better than two-to-one, 60% – 28%.Â  Two percent (2%) prefer some other candidate, while… END_OF_DOCUMENT_TOKEN_TO_BE_REPLACED

by 1776 Coalition
April 29, 2010
By CARRIE BUDOFF BROWN & MEREDITH SHINER, POLITICO
Senate Republicans took what they could get. With bipartisan negotiations at an impasse and Democrats pledging to …
END_OF_DOCUMENT_TOKEN_TO_BE_REPLACED

by 1776 Coalition
April 23, 2010
By CARRIE BUDOFF BROWN & MEREDITH SHINER, Politico
Senate Majority Leader Harry Reid (D-Nev.) placed a bet Thursday: Call the roll on a Wall Street reform bill and at least one Republican will say â€œaye.â€ Emboldened by public anger at Wall Street, Democrats set the first key vote for Monday on a bill to rein in the financial industry â€” …
END_OF_DOCUMENT_TOKEN_TO_BE_REPLACED