Where Are the GOP Super PACs in the Massachusetts Special?

by Kyle Trygstad, RollCall.com
June 13, 2013
Maybe this race isnâ€™t as close as advertised. Despite two new public polls showing a 7-point race, the Republican-aligned outside groups that swamped the 2012 landscape with TV advertising are still nowhere to be found in the special election for Senate in Massachusetts. American Crossroads, the U.S. Chamber of Commerce and other groups generally supportive of Republican candidates have so… END_OF_DOCUMENT_TOKEN_TO_BE_REPLACED 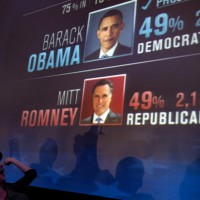 by 1776 Coalition
October 15, 2012
WASHINGTON (CNNMoney) — The 2012 election season couldn’t have come at a better time for the U.S. Postal Service. While still low on cash, the… END_OF_DOCUMENT_TOKEN_TO_BE_REPLACED

Corporations under pressure on political spending

WASHINGTON â€“Â President ObamaÂ raised more campaign money last month than any of the Republicans vying to replace him, but leading Republican outside groups are outstripping Democratic-aligned super PACs in fundraising, new figures show. Obama collected $21.3 million in his campaign account in February, not counting millions more he has raised for theÂ Democratic National… END_OF_DOCUMENT_TOKEN_TO_BE_REPLACED

Some Super PACs, outside groups that can raise and spend unlimited funds to help elect or defeat candidates, have spent heavily to influence the presidential race. Some of these groups released new numbers Monday night. Presidential candidateÂ Mitt Romney‘s fundraising dipped to $6.5 million in January, as he struggled to fend off his Republican rivals… END_OF_DOCUMENT_TOKEN_TO_BE_REPLACED

by 1776 Coalition
February 2, 2012
By Richard McGregor, Financial Times Republicans are rapidly eroding the huge funding advantage that propelled Barack Obama into the White House, with wealthy donors flooding new conservative campaign groups with cash before theÂ presidential election in November. The super-political action committee backing Mitt Romney,Â the Republican frontrunner for the 2012 nomination, raised $30m last year, according to filings with the… END_OF_DOCUMENT_TOKEN_TO_BE_REPLACED

GREENVILLE, S.C. â€“ In the past, conventional wisdom said a presidential candidate was going to have trouble raising money if he hadn’t shown sufficient popularity by the timeSouth CaroliniansÂ voted in their first-in-the-South primary. That may still be true, but there’s a new wrinkle this cycle that could change the historic winnowing pattern… END_OF_DOCUMENT_TOKEN_TO_BE_REPLACED