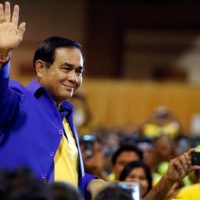 by BBC
June 6, 2019
Retired general Prayuth Chan-ocha, the man who led a military coup in Thailand five years ago, has been elected as the country’s civilian prime minister.… END_OF_DOCUMENT_TOKEN_TO_BE_REPLACED

by 1776 Coalition
September 13, 2011
ByÂ Richard S. Ehrlich – Special to The Washington Times BANGKOK | When Thai voters recently elected a joke-cracking, former massage parlor tycoon to parliament, they probably did not expect him to expose police corruption and topple the countryâ€™s police chief. All the drama is thanks to the wise-guy tactics ofÂ Chuvit Kamolvisit, who is using his status as a… END_OF_DOCUMENT_TOKEN_TO_BE_REPLACED

by 1776 Coalition
July 4, 2011
By Ploy Ten Kate (Reuters) – After six prime ministers in six years of sometimes bloody political upheaval, Thais might be excused for shrugging their shoulders about voting in number seven. But this time there’s one big difference. The new prime minister will be a woman, the first to hold the position inÂ Thailand. Yingluck Shinawatra, a 44-year-old businesswoman who… END_OF_DOCUMENT_TOKEN_TO_BE_REPLACED

by 1776 Coalition
July 4, 2011
By Ploy Ten Kate, Reuters After six prime ministers in six years of sometimes bloody political upheaval, Thais might be excused for shrugging their shoulders… END_OF_DOCUMENT_TOKEN_TO_BE_REPLACED

by 1776 Coalition
August 23, 2010
By Richard S. Ehrlich-The Washington Times BANGKOK | Prime Minister Abhisit Vejjajiva is trying to repair damaged relations with the Kremlin after Moscow’s foreign minister condemned the Thai government’s decision to extradite Russian weapons dealer Viktor Bout from Bangkok to New York. “In a situation like this, pressure is normal. So it is best to handle it in a straightforward… END_OF_DOCUMENT_TOKEN_TO_BE_REPLACED