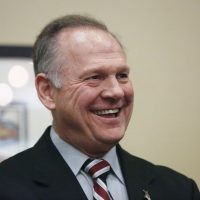 by Washington Post
November 12, 2017
Roy Moore’s refusal to bow out of Alabama’s special election for a Senate seat is the latest demonstration of the diminished power of congressional leaders… END_OF_DOCUMENT_TOKEN_TO_BE_REPLACED

by 1776 Coalition
October 28, 2012
By ALEXANDER BURNS | Politico GOP Rep. Todd Akin is airing his harshest TV ad yet against Missouri Sen. Claire McCaskill, accusing her of allowing her husband to transact personal business in the Senate and profiting off her office. The commercial rests on statements made by a former employee of Joseph Shepard, McCaskill’s husband. That ex-employee told the Daily Caller… END_OF_DOCUMENT_TOKEN_TO_BE_REPLACED

Akin compares McCaskill to a ‘dog’

by 1776 Coalition
October 23, 2012
USA Today GOP Rep. Todd Akin likened Democratic Sen. Claire McCaskill to a dog who plays “fetch” and brings back higher taxes and more regulation to Missouri. Akin’s comments on “legitimate rape” have already caused top Republicans to abandon him in the U.S. Senate race. His latest remark was made during a fundraising event Saturday and was first reported by… END_OF_DOCUMENT_TOKEN_TO_BE_REPLACED

by 1776 Coalition
October 4, 2012
(Reuters) – Senator Claire McCaskill, whose Missouri re-election campaign has attracted national attention since her Republican challenger made controversial remarks about rape, said on Wednesday she raised $5.8 million in the last quarter. McCaskill, once seen as one of the most vulnerable Democratic incumbents, announced the figure on Twitter on Wednesday afternoon – twelve days before required – and wrote,… END_OF_DOCUMENT_TOKEN_TO_BE_REPLACED

by 1776 Coalition
September 26, 2012
By Joshua Miller and Niels Lesniewski, Roll Call Rep. Todd Akin reaffirmed for the final time today that he will be the irrevocable Republican Senate nominee in Missouri, despite the best efforts of national Republicans to get him to step aside after he made now-infamous comments about â€œlegitimate rape.â€ At a press conference in St. Louis, where he didnâ€™t take… END_OF_DOCUMENT_TOKEN_TO_BE_REPLACED

by 1776 Coalition
September 26, 2012
(Reuters) – Missouri U.S. Senate candidate Todd Akin, unmoved by pressure to drop out of the race by a deadline on Tuesday, got a pledge of support from the state Republican Party and some Tea Party-linked conservatives considered donating to his campaign. Akin has been urged to quit by fellow Republicans over his controversial remarks on rape. In a sign… END_OF_DOCUMENT_TOKEN_TO_BE_REPLACED

Gingrich says GOP should back Todd Akin in Missouri

by 1776 Coalition
September 23, 2012
By Paige Winfield Cunningham-The Washington Times Besides attacking each other over Medicare, school lunches and the Iraq war, Missouri Democratic Sen. Claire McCaskill and GOP challenger Rep. Todd Akin spent their first debate Friday blaming each other for the gridlock in Congress that has stalled crucial pieces of legislation over the last two years. And after initially mentioning the damaging… END_OF_DOCUMENT_TOKEN_TO_BE_REPLACED